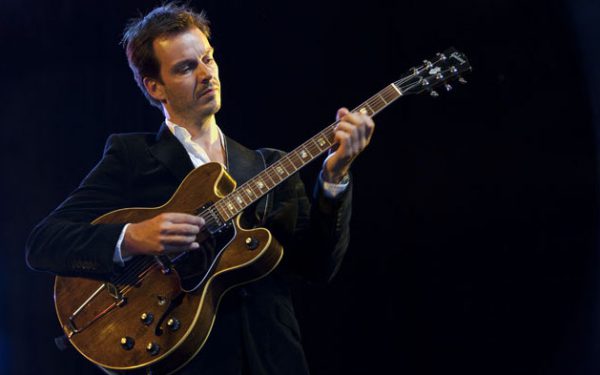 Jesse van Ruller started playing guitar at age seven. In 1990 he began his studies with Wim Overgaauw at the Hilversum Conservatory where he graduated summa cum laude in 1995. The same year he won the award for best jazz guitarist in the international Thelonious Monk International Jazz Guitar Competition, becoming the first european musician to win this prestigious award. the jury, consisting of Pat Metheny, John Scofield, Jim Hall, Pat Martino and Mark Whitfield, was of the opinion that van Ruller is one of the most promising talents of his time. He has recorded and released several CD-albums with its name and performs trio or quartet format with Karel Boehlee, Frans van Geest and Martijn Vink. Also plays regularly with other bands like The Jazz Orchestra of the Concertgebouw, Michiel Borstlap Group, The Piet Noordijk Quintet and formed duo performances with guitarist Maarten van der Grinten. Jesse has shared the stage and recorded with musicians as Tom Harrell, George Duke, Christian McBride, Mike Stern, Kenny Washington, SFEQ, Benjamin Herman, Larry Goldings or Idris Muhammed.
His three solo albums have been released by Universal in Japan, achieving great success. “Catch!” his third album released on CD, includes the participation of Roy Hargrove on three songs. The album is nominated for the Edison Award (the Dutch equivalent of the Grammys). Van Ruller also teaches music at the Conservatory of Amsterdam.