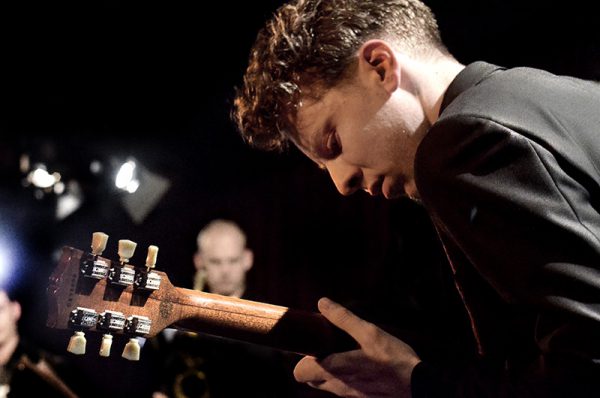 Composer and guitarist Reinier Baas (1985, Hilversum, Netherlands) is one of the most prominent figures of the current young dutch jazz scene.
Since 2010 leads the The More Socially Relevant Music Jazz Ensemble. This quintet is completed by saxophonists Ben van Gelder and Hogenhuis Maarten, along with drummer Mark Schilders and bassist Sean Fasciani and have been marked as “the most fascinating and interesting part of Holland” (Volkskrant).
With its irreverent nature, his unique visual language and its original improvisation reached the prestigious Edison Award in 2013.The quintet seeks to unify independent alternative music with contemporary classical music, jazz and improvisational music. Their influences range from Brahms to Coltrane through Kendrick Lamar and Arctic Monkeys, and their compositions from the complex and intricate to the more danceable music. Reinier Baas graduated from the Amsterdam Conservatory in 2010 with ratings of 10 out of 10. Part of his training was also conducted in the academy Manhattan School of Music in New York. He has performed at major festivals and venues all over the world, such as the North Sea Jazz Festival, Umbria Jazz Festival, 12 Points Festival, Wellington Jazz Festival, the Bimhuis, Concertgebouw and many more. As a soloist he has also performed with the Metropole Orchestra, the National Youth Orchestra and the National Youth Jazz Orchestra. He has been a musician in the formation of such big names as Han Bennink, Gregory Porter, Chris Speed, Benjamin Herman, Nederlands Blazers Ensemble, Ben van Gelder, Hans Teeuwen and Jesse van Rulli. In 2015, both the North Sea Jazz Festival and the November Music Festival commissioned him to new musical compositions. Reinier Baas is a member of the New Rotterdam Jazz Orchestra, and teaches in the conservatories of Amsterdam and Rotterdam.