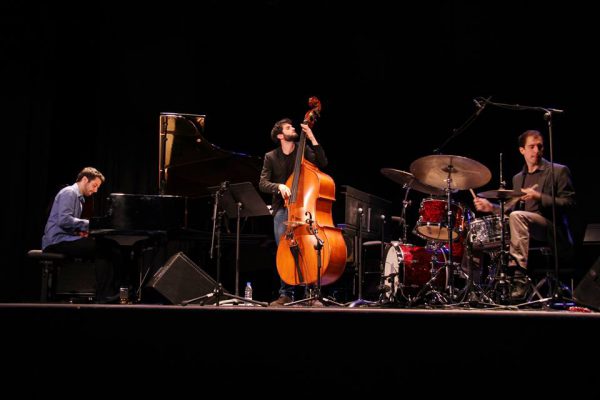 The young Catalan pianist Xavi Torres, one of the most prominent and most promising national jazz scene musicians, currently living in Amsterdam, where he completed the Master of Jazz and the Bachelor Classic in the Conservatorium van Amsterdam, after graduating with registration of honor at the ESMUC. He leads his own group, Xavi Torres Trio, training has recently been awarded “Best Group of 2015” by the association of jazz musicians and modern music in Catalonia (AMJM) awards which were also finalists in the categories of best album and best composer. In March 2015 they won the prestigious competition “Keep An Eye International Jazz Award”. The year before Xavi Torres already won the prize as best soloist in the same competition. He also was in late 2015 when Xavi Torres took the Stichting Jazz Talent Award of Amsterdam. Torres leads his trio accompanied by Vic Vic Moliner Moliner on double bass and Joan Terol on drums. Moliner is one of the most active musicians in Barcelona, either as bassist, producer or composer, and Teruel one of the most sought batteries in Holland and Catalonia and has already played with figures like Benny Golson, Lee Konitz or Maria Schneider.

The group recorded its first album in the summer of 2014 entitled “Skyline”, produced by the renowned musician and producer Juan Diaz. The album came out in January 2015 and has already been presented in the Netherlands, Italy, Mallorca and Catalonia. The repertory group consists of original compositions Torres and seeking the personality of the trio, formed in 2010. They have their own sound from the track of a wide range of musical influences from Brad Mehldau, Wayne Shorter and Gerald Clayton, to The Beatles, through Bach, Brahms and Bartok. They have performed concerts in different venues and festivals throughout Europe (Grachtenfestival, Meer Jazz Festival, Amsterdam Bimhuis room, Jazz Festival of Reus, Banyoles, Girona, Siena Jazz Festival among others). In March 2014, the trio received a special custom Tarragona Dixieland Festival for a concert with two of the most important saxophonists in the country, Perico Sambeat and Llibert Fortuny.

Currently they are one of the strongest and more demanded bands of the Dutch jazz scene.